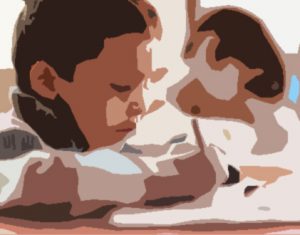 Browsing the web, I have come across some really bad advice for teaching spelling.

This bad advice recommends that children approach words as strings of letters to be memorized.

“Have him say the word while looking at it. Tell him to close his eyes, try to see the word, and then spell the word out loud. Have him look at the written word to see if he’s spelled it out loud correctly. Ask him to look at the word, then cover the word and have him write it.”

Some spelling advice involves equipment beyond paper and pencil.

Such advice ignores the fact that words are made up of sounds and that certain letters stand for certain sounds. The best way to learn to spell most English words is to

The bad advice described above requires a learner to memorize the look of a word without paying any attention to the sounds in the word. In the short term, a child can memorize several hundred words in this way.  In the long term, the student who learns to spell this way is able to spell fewer new words.

The student who can apply the sound/symbol conventions of English to spelling can learn to spell new words indefinitely.

Here is how I would teach the ten words on the spelling test given in the post How to Give a Spelling Test.

Two syllables: ac-cept. Each letter in this word represents a distinct sound.

When a word has two c’s, the first c usually has the /k/ sound. The second c has the /s/ sound. When a vowel (a, e, i, o, u) is followed by a consonant (the letters that are not vowels), the vowel will have its short sound. (The short sound of e is the sound it has in bed.)

One syllable. Although the word contains five letters, it is pronounced with only two sounds.

This is one of a handful of common English words spelled with “four-letter a.” The combination eigh represents the long a sound. (The long sounds of the vowel are their names in the alphabet. The long sound of a is the sound it represents in ape.) A letter combination like eigh that represents one sound is called a phonogram.

Two syllables (for-ty). This word has five letters, but four phonograms. The combination or is one phonogram representing the sound it has in words like or and more. Because the word forty names a number, it is often misspelled as “fourty.” Think, f-or-t-y.

One syllable. Seven letters, six phonograms: f-r-ie-n-d-s. In this word the combination ie represents the short e sound. For children who may have trouble remembering the letter order of ie, a spelling pronunciation that helped me learn it was to think the silly pronunciation [fry-end], which helped me remember that the i comes first. The s at the end of the word represents the /z/ sound.

Two syllables (man-ner). Six letters, five phonograms. The combination er is a single phonogram that represents the sound of [er] in her. The a in the first syllable represents the short sound of a because it is between consonants. The sounds of the two n’s run into each other.

Three syllables (prin-ci-pal). Nine letters and nine sounds. All three vowels are short. Principal can be used as an adjective or a noun. As an adjective, it means “most important.” As a noun, it refers to a person who has the highest rank in a group. A principal is the chief administrator in a school. In earlier days, schools were directed by one of the teachers, who was known as “the Principal Teacher.” A common misspelling for this word occurs with the third syllable. A memory device to remember the spelling often gets a groan from students: “Remember, the principal is your pal.”

Two syllables (re-al). When the vowel e ends a syllable, it usually has its long sound. The a in the second syllable is not pronounced with the short sound of the letter. Instead of the sound of a as in at, it has an indefinite sound something like “uh.” Real is the opposite of imaginary.

One syllable, four letters, three sounds. The final e is silent, but it has a function. It indicates that the i has its long sound. A site is a location, a place.

One syllable, three sounds. The vowel is “four letter a”: eigh. Weight is a form of measurement, according to how heavy something is.

If this approach seems to be more time-consuming than having children memorize the letter-order of a word, it is. But taught in this way, the spellings enter long-term memory. In addition, the student develops the valuable habit of paying attention to detail.