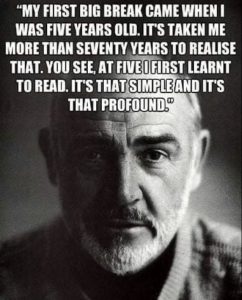 No matter how the 2020 election turns out, the inequities of public education are not going to even out for a very long time.

As parents struggle to keep academics on track in a reality of in-person, online, and no-participation schooling, the only certain path to adult empowerment for their children is the acquisition of reading fluency.

The child who can read fluently can gain the basics of a what in the United States is generically called a “college education.”

I’ve illustrated this article with a meme of the late Sean Connery. The man who developed the intellectual ability to interpret a wide variety of roles left school at the age of thirteen. From then until his twenties, when he had the opportunity to become an actor, he took a variety of jobs, none of which required academic skills. When opportunity finally knocked, the man who had left school at thirteen possessed the one essential academic skill that enabled him to embrace it.

He was a fluent reader.

Here’s what Connery said in an interview in the film magazine, Premiere:

[Actor Robert Henderson] gave me a list of all these books I should read. I spent a year in every library in Britain and Ireland, Scotland and Wales…. I spent my days at the library and the evenings at the theater.

According to the quotation in the meme, Connery could read at the age of five. That gave him eight years to develop the skill before he left school to help support his family during the Great Depression.

Given an early foundation with systematic phonics instruction and eight years of challenging reading, most US thirteen-year-olds could develop a level of reading fluency sufficient to overcome some of the racial and economic disparities that exist in the current public-school system.

Parents can do much to ensure that their children acquire genuine reading fluency. The key is a confident grasp of the sound/symbol code of English and hours and hours of reading—not superficial reading, but books that build vocabulary and general knowledge.