If what people spend money on indicates what they value, then one must conclude that in the US, taxpayers value locking ignorant people up more than preventing children from growing up ignorant.

Policy-makers of every stripe and level pay lip-service to the importance of education, but when push comes to shove, they prove again and again that public education is way down on their list of priorities. Maintaining people in prison, on the other hand, eats up tax dollars.

I settled on a dozen states for purposes of comparison. I gathered the statistics in 2018.

Here are the average amounts twelve states spend to educate children K-12 and to keep adults in prison. The ratios are similar in all fifty states. 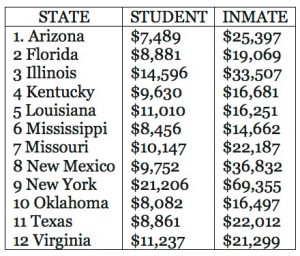 Studies support the importance of early childhood education in preparing children for school and instilling positive character traits, but, so far, only three states—Florida, Oklahoma, and Georgia—have funded universal preschool for their children.

I suspect that if states would provide quality preschool programs for all its three- and four-year-olds, we would see a corresponding decline in prison populations.

Eighty percent of young people who become involved with the justice system have difficulty reading. Seventy to eighty percent of the adult prison population ditto. Every year, about a million young people drop out of school without completing high school. A large percentage of those who do graduate have not reached a level of basic literacy as defined on this site.

Children who begin school lacking adequate preschool language and social exposure start their academic work two to three years behind the children who come to school with a rich preschool experience. They never catch up.

In many districts, parents are proving that they can gain the attention of legislators. Perhaps some of this parental passion might be deflected from the culture wars and channeled into an effort to obtain universal preschool and systematic phonics instruction in all the states.