Robert Browning’s poem “The Pied Piper of Hamelin” tells the tragic story of how a community lost a generation of children because of a short-sighted, self-serving local government.

I think about that poem every time I read about another state legislature’s reluctance to pay what’s needed to educate their young people.

The recent spate of teacher walkouts shines a light on the similarities between the burghers of Hamelin and state legislators.

The well fed pols of Hamelin town promised the Piper a thousand guilders for his services in ridding the town of rats, but when he’d done the work, the mayor said the town could only afford to pay him fifty.

Politicians of every stripe and level pay lip-service to the importance of education, but when push comes to shove, they prove again and again that public education is way down on their list of priorities.

To satisfy my curiosity as to how public school conditions in Virginia, Kentucky, Oklahoma, and Arizona compare with some of the other states, I did a web search for statistics. To keep this post to a reasonable length, I settled on a dozen states to compare.

I learned that states attach a higher priority to keeping people in prison than in educating children. Here are the average amounts twelve states spend to educate children K-12 and to keep adults in prison. The ratios are similar in all fifty states. 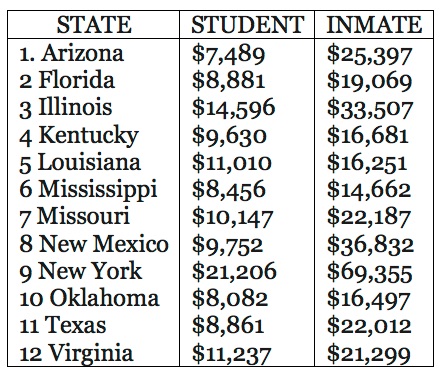 Although studies support the importance of early childhood education in preparing children for school and instilling positive character traits, state legislators in all but three states (Florida, Oklahoma, and Georgia) steadfastly resist funding universal preschool for their children. It’s a pretty safe bet that if states would provide quality preschool programs for all its three- and four-year-olds, they would see a corresponding decline in prison populations.

Eighty percent of young people who become involved with the justice system have difficulty in reading. Seventy to eighty percent of the adult prison population ditto. Every year, about a million young people drop out of school without completing high school. A large percentage of those who do graduate have not reached a level of basic literacy as defined on this site.

Children who begin school lacking adequate preschool language and social exposure start their academic work two to three years behind the children who come to school with a rich preschool experience. They never catch up.

From the site howmuch.net, I learned that—economically speaking—beginning teachers do not belong to the Middle Class. Indeed, they don’t even qualify for the Working Class.

A cost-of-living app at howmuch.net presents information for three categories: Minimum Wage, Working Class, and Middle Class. The annual salary for a minimum wage worker is given as about $15,000. The working class salary is about $58,000. The middle class salary is in the range of $70,000 and above. I looked at the figures for Louisville, Kentucky.

Here are the estimated annual expenses (taxes, rent, food, utilities, healthcare, and transportation) for each of the three classes to make their home in different sections of Louisville. For some reason, the working class figures include child-care, but the other two categories do not. You may want to browse the cost-of-living apps at the howmuch site.

Here is how the twelve states on my list stack up regarding average household income and beginning teacher’s salary. 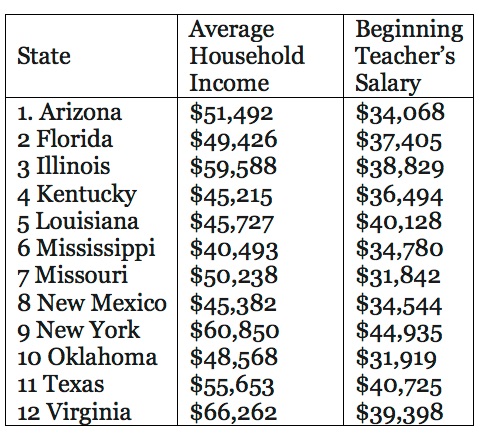 The Hamelin burghers congratulated themselves on their cleverness in taking advantage of a politically powerless service provider. Too late, they realized that their cleverness had cost them their future.

Effective public education requires adequate funding and intelligent leadership at the state and local levels. Voters concerned with the future of the young people in their states need to spare some attention from the national arena and get to know local elected officials and their views on the value of public education. As long as voters remain apathetic, the Hamelin attitude will prevail.